Problem: When my 5-year-old daughter gets mad at me, she says, “I hate you, Mommy!” It shocks me when she says this and it hurts my feelings. I also get angry at this kind of outburst, which mostly happens when she doesn’t get her way. I’d like to know if other kids say these hurtful words to their parents and how I should deal with her when she says this to me.

Insight: Think for a moment how often you use the word “hate” in your life – “I hate my hair.” “I hate when it rains.” “I hate when people do that.” “I hate this shirt.” “I hate the way he speaks to me.” While you may not realize it, your child has probably heard the word, “hate” used -by you- quite often. And, since all children are exposed to the word “hate,” they learn; when you don’t like something, or when something doesn’t go your way, you describe your feelings by saying, “I hate….” Should we be so alarmed and surprised by this, since children are natural mimics?

Strategies: If you’re bothered (and understandably so) by hearing the word “hate” used by your daughter, I would first suggest that you take it out of your vocabulary. The less she’s exposed to the word at home, the less she’ll use it. Also, remember that a 5-year-old still has a hard time putting her exact feelings into words. While you may feel betrayed when she turns on you over a disappointment and expresses her anger by saying, “I hate you,” consider the following points:

Do understand that when a young child gets angry with her parents, it’s common for her to shout, “I hate you!” The outburst may come after you say she can’t go outdoors or have a friend over or do something else she wants to do.

Don’t take her words so literally. This kind of expression is short-lived.

Do believe that she doesn’t know how to say, “Mom I think you should allow me to stay up later tonight because…” or, “I’m angry with you because you said…” A 5- year-old is too young for this kind of articulation and even too young to show consistent respect.

Don’t hesitate to offer her other ways to tell you how she feels. Suggest she say, “I’m mad at you,” “I’m angry,” or “I don’t like what you did.” Acknowledge her feelings, but say, “I want you to tell me in different words.”

Do assume that using the word, “hate,” is the beginning of her expression of negative feelings. She needs to learn that feeling upset and angry is okay – so choose your response carefully.

Don’t be quick to respond by saying, “That’s not nice!” or “Don’t let me hear those words again.” Instead, acknowledge her angry feelings, and understand that eventually, with your help and maturity, she’ll learn to state her feelings more appropriately. I promise.

Do expect to feel frustrated when your adult reasoning, logic, and caring fail to keep your child from yelling, “You mean mom!” “I hate you!” Your child’s words can feel threatening, especially if you don’t like your child to be angry with you.

Don’t forget the important role you have in teaching (although it takes time) your daughter to express her anger in acceptable ways.

Do consider this approach: When your daughter says, “I hate you, Mom!” rather than make an issue of it, simply restate her words. Say back to her, “You’re really angry at me aren’t you? You don’t like it when I say it’s time to come in.” If she hears you express her anger in this way, she gradually will begin to use similar statements herself.

Bottom Line: You should take note of your daughter’s keen ability to copy your words and behavior and think about how you speak to her and others (your husband, family members, store clerks, other drivers). What’s your general tone? Do you yell? Are you short-tempered? How do you express disappointment? Do you correct her negative words, and not yours? After careful thought, you might consider changing your ways so that your daughter will have the role model she needs to help her grow into a nice, sensitive and caring person.

We are Samantha and Ray... 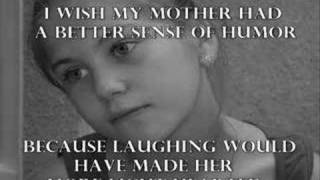 I Wish My Parents……

It’s So Important to Discipline Kids

I Want My Kids to Get Along With Each Other

To Bribe or Not to Bribe

Do You Have A Shy Child?